Recently Atlanta Special FX was honored to collaborate with some of America's finest wedding planners and production companies to produce a winter white snow themed wedding for David Tutera. The populare reality TV series My Fair Wedding contracted with Atlanta Special FX to produce the white fluffy falling snow you see in Episode #147 on WeTV. After weeks of planning the production staff and Pilgrim Studios designed a breathtaking winter wonderland creation and gave the bride and groom the biggest surprise of the show. Over the past 4 years the snow creation work of Michael Willett and Atlanta Special FX has been featured on multiple reality TV shows and movies including names like ABC's Extreme Makeover Christmas Special, E1 entertainment's Party Mama's, and many more. "We specialize in adding that wow factor and suspending imagination to produce a realistic effect for our clients" Willett Said. "This is what we love to do, and it shows." Some of the effects used to produce this effect are articial snow blankets, snow flocking, QES-100evaporating snow flakes manufactured by Atlanta Special FX, evaporating snow machines, and "Magic Snow". Below is a clip from the collaborative efforts of these great companies to produce realistic snow effects...even if they are indoors.

Posted by Special Effects Pros at 12:27 PM No comments: 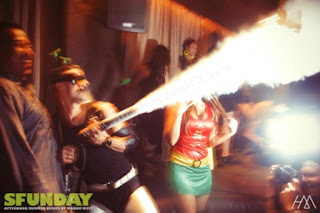 This is the sale of the year on CO2 cryo foggers.  The club scene has popularized the portable handheld cryo gun and now Atlanta Special FX has made it affordable for you.  This sale has never been done by anyone in the industry and may never be done again so don't miss out.  This cool, literally cool, dj effect is totally mobile and doesnt require any electricity so you can take it into any venue or on the road with minimal efforts, and trust they will work great everytime.  Used with proper lighting it can even be made to look like a flame effect (As seen in the photo above)  In addition if you purchase a cryo kit (Including Backpack and 4 Foot Cryo Hose Seen Below) you will receive 10% off your accessories.  Call today and take advantage of the savings. 404-644-2804

Offered By:
Atlanta Special FX
404-644-2801
www.AtlantaSpecialFX.com
Posted by Special Effects Pros at 10:33 AM No comments: